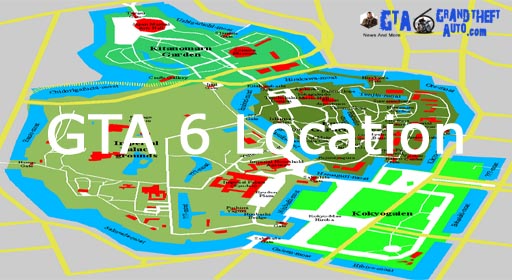 Grand Theft Auto is a series of video games which would soon release its new series: GTA 6 with rich graphics and additional features. After the great success of GTA 5 none of us has any doubt that the upcoming new series would be super hit like any other prior series.

GTA 5 happened in the city “Los Santos” and now speculations are being made about the place where GTA 6 would happen. We can never put an end to these speculations and rumors but for sure we can give a meaning to them.

GTA 4 took place in “Liberty City”, GTA 5 took place in “Los Santos”, and next in the series is GTA 6 which could probably take place in “Vice City 2” as heard from the sources. But there are few other beautiful places we expect to see from Rockstar for Grand Theft Auto 6 to keep gamers or game lovers more engrossed with the upcoming series.

We should not necessarily be stuck in United States, where the majority of the GTA titles have taken place. In fact “Grand Theft Auto: London” was the only GTA game which took place outside of the US. Why don’t we try some other place than US, that mean’s there are many superbly vibrant cities around the planet which could be a great option to be considered for GTA 6.

Here we take a look at few of the possibilities for the next generation GTA.

This Japanese city is startling and even has beautiful designed architecture. The city has a mixture of classical Japanese history and a reflection of western culture. The dazzling lights of Tokyo, great location and number of islands belonging to the nation would undoubtedly give you reasons to explore this city and outside of the city.

Las Vegas as we all have heard is one of the most beautiful places on the planet. Well, apart from being beautiful, it has the overly lavish architecture, and the surrounding deserts makes the place more than just being beautiful.

We are surprised, why none of the GTA series took place in Las Vegas? The city deserves it and would also be a perfect place to hide a body or two because of the desert surrounding areas.

Miami is the 42nd largest city in the US with beautiful surroundings and Miami Beach is one of a wonderful attraction there. And now when the players are adapted to water and can actually swim, then this could be one of the most “has to be” places for GTA 6. Also, it may be a good time to reconnect with Vice City whose part 2 i.e. “Vice City 2” is probable to be a chosen location for GTA 6 as per some sources.

Paris, a part of France is known as the most romantic destination of the world. It has famous landmarks, beautiful places and most beautiful Eiffel Tower to keep a player keen and interested. If GTA 6 will take place here, then many of the GTA lovers will enjoy around their dream location. This would undoubtedly magnetize the game lovers towards it.